What is Flutter, and its contribution to your project’s success? 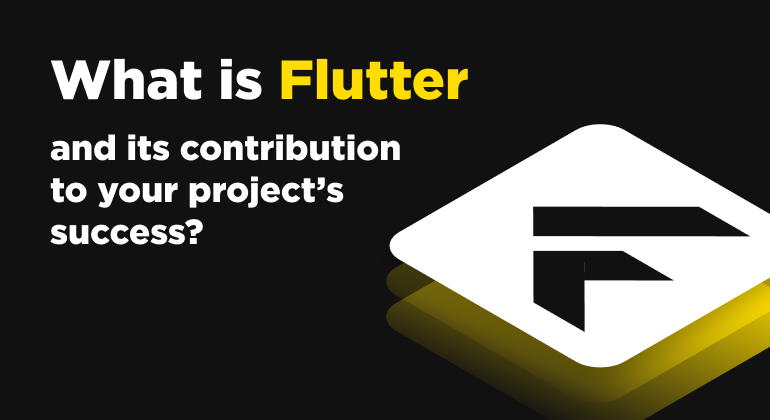 With the advancement of mobile app development , having a reliable programming tool is a must. Who even wants to go back in time and spend weeks, months, or even years creating different versions of the same app for different platforms as well as maintaining so many codebases? Not to mention having to deal with the UI design frameworks!

Modern problems require modern solutions, and, naturally, something new has emerged, ready to assist developers in building amazing mobile applications. Flutter framework has become a complete game-changer, and in this article, we will shed light on its genius and why you better consider learning and implementing it in your own business project!

You’ve probably got the gist and can see that Flutter is something that helps overcome the many challenges of the mobile app developers, but what exactly is it? Basically, Flutter is an open-source software development kit (SDK) provided by Google. Being a portable UI toolkit for building mobile, web, and desktop apps alike, it provides a swift style operating on a Javascript bridge, making it a direct React Native  competitor.

Flutter effortlessly integrates with various platforms such as IOS, Android, Windows, MAC, Linux, and many more! Although we have to say that Flutter is primarily used for developing Android and IOS mobile apps. A characteristic that sets Flutter apart from its rivals is that a developer can program Flutter applications for these two utterly different OS via just one codebase, which is a huge advantage. When it first emerged in 2015, Flutter was available for Android only, but throughout the years, it has developed dramatically and continues to do so.

Flutter is based on Dart programming language and integrates Material Design and Cupertino widgets. One of the many cool things about the language is that you don’t have to adapt to it since its code is compatible with most browsers. It is also object-oriented and garbage-collected and sometimes is even faster than JavaScript ! Did you know that Google’s Fuchsia apps are directly developed with Dart? No wonder the growth of Dart users came up to +532% in 2020 compared to 2019, which is a staggering amount.

To avoid sugarcoating and loud statements, we would like to make a disclaimer: of course, Flutter is not the name of the game for mobile app developers. It obviously has advantages and disadvantages. But hey, what doesn’t? The key thing is to familiarize yourself with the nitty-gritty of it all and pick what’s best for you.

Here are the main pros of Flutter mobile app development: 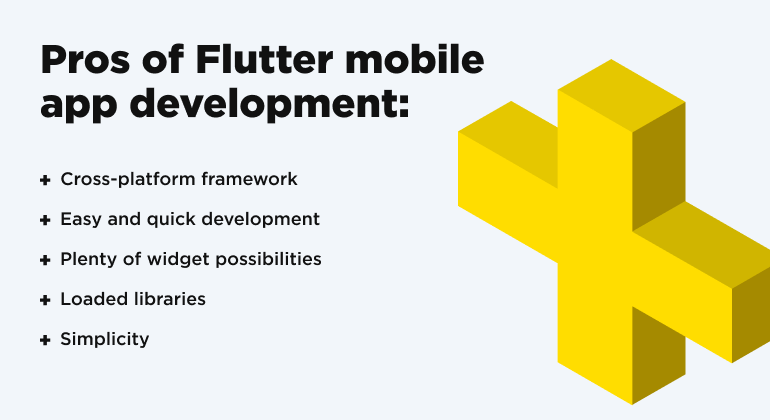 Being a cross-platform environment means that Flutter is a framework you can employ to design and develop on almost every machine across the board (IOS, Android, Web, Mobile) with just one requirement from the device: a blank page. If app developers are using the Flutter system, there is absolutely no need to create individual app versions for each platform: when building a cross-platform app, you can then touch up the details on different smartphones.

The explanation behind this advantage of Flutter is that having to create a single codebase shortens timelines and cuts the operating resources costs tremendously. Since the appearance of a new Hot Reload feature, developers may now skip certain time-consuming steps when it comes to testing. Fixing bugs, as well as implementing changes in your app, and even experimenting with the native code - all can easily be done with Flutter!

Flutter is based on a custom widget principle, allowing the creation of awesome visuals for your app. Moreover, with Flutter, you can rest assured that the UI on different devices will be a piece of cake to handle!

Skia Graphics Library is an open-source library integrated by Flutter, which too is an open-source framework. Users are provided with a smooth app experience and quick loading thanks to the system reacting to any view changes by redrawing the UI every single time.

If you have to create an app ASAP or your budget is limited, Flutter has you covered! By plugging customized widgets together one by one, you are essentially putting together a native mobile app that feels impressive no matter what device is being used.

Why is Flutter best for hybrid app development?

If you are looking for a framework that will look and feel native across all platforms, could be developed fast and easily but would prove cost-effective at the same time, Flutter certainly is the best option for you.

Think about it: you don’t spend gobs of money on creating and maintaining two mobile apps for both IOS and Android because Flutter requires just one codebase; to build your MVP , you essentially need one developer; a Flutter app is like the native app’s twin - you won’t be able to tell them apart; and finally, Flutter is beautiful because of its customization possibilities provided by the widgets.

When choosing an app development system, programmers often gravitate towards Flutter for several reasons. Here is a concise list of the benefits which will persuade you to do the same! 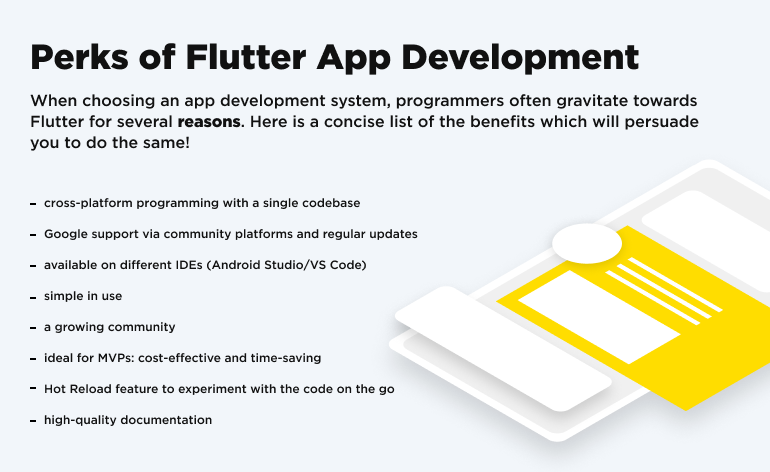 How much does Flutter app development cost on average?

Developing a Flutter app is indeed more cost-effective than building a native app due to the many reasons discussed above. Nonetheless, there are a few factors that may impact the cost eventually. You need to be aware of the fact that ‘cost-effective’ doesn’t equate to a ‘cheaper option.’ It still means that some issues affecting software development projects may also arise with Flutter.

Ready to start your project with Flutter?

Basically, we can highlight the following factors that may affect the Flutter app development cost. 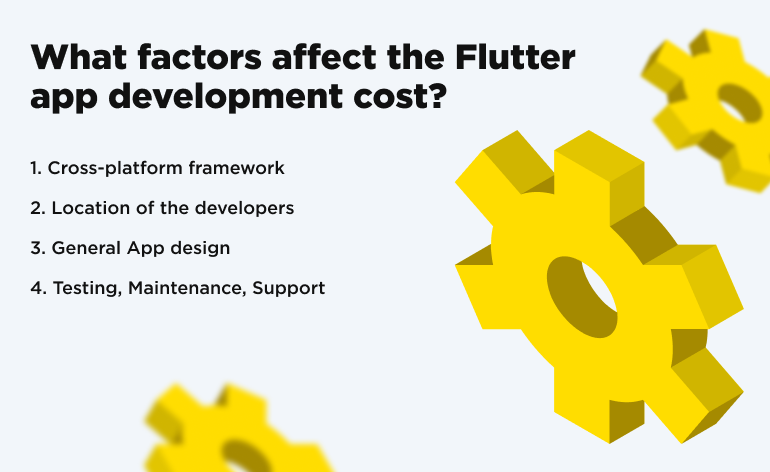 The complexities and functionalities

Apps are categorized as ‘low,’ ‘medium,’ and ‘high’ in terms of the complexity of the programming process. It’s quite simple and logical: the more features you want, the more money you will need to spend to cover the time and efforts of the developers.

Since features are the central components of any app, they substantially decide the cost of the project. To give you an example, it takes about 6 hours to develop a photo upload feature, but it would take up to 80 hours for the developer to apply a filter to that same photograph. Let’s say the development cost is USD 50 per hour, and if you want to add the features like a text chat (160 hours) and location map development (300 hours), you can roughly estimate the cost of the app with these features added.

Location of the developers

Whether Flutter or not, developers in North America, Australia, and Western Europe typically charge the highest. However, Eastern European countries, Ukraine, for example, may charge you less partly because it is one of the top software development outsourcing destinations. Don't be fooled by a lower price; the quality of the product doesn’t suffer. The reason behind a lower cost also lies in the availability of programmers in those regions.

Needless to say, the more intuitive, native, and aesthetically-pleasing user design you crave, the higher the Flutter app development cost will come up to. While UI aims for a better outlook for the app, UX presents users with a seamless software interaction. You won’t be able to offer a fantastic user experience without both UI and UX design on a high level.

Unfortunately, since no software is ever finalized,  your budget should be able to cover not only the testing part before launching the app but also the costs of regular updates, maintenance, and support.

Despite all of these, the app development cost mostly depends on the hours spent to finish each process. This is the main reason that when analyzing the possible cost it’s better to get a consultation and discuss the pitfalls with professionals.

UI/UX design  is the backbone of any successful app. In the realm of app development, whether Flutter or native, it is a matter of effort and hours spent. Clients don’t usually take it into account, but UI/UX elements such as typography, navigation development, and even color schemes take developers anywhere from 20 to 300 hours of effort! Not to mention that the prototype of your app is also provided by UI/UX designers.

The Cost Of Flutter App Development And Testing

Typically, to determine the average cost of creating and developing a Flutter app , our development team first evaluates the number of hours it will take to engineer every specific function and feature. Basically, the process of cost evaluation may be divided into two stages.

At first, meetings between project managers, business analysts, coders, designers, and so on take place. Such meetings aim to analyze every aspect of the project, set agreements on the Flutter developer hourly rate, determine preliminary TTC (time-to-completion) estimates, and establish the Flutter app development cost. The next step is for the developers to create the app concept layout, which, after being approved, undergoes the development process and, afterward - testing.

Curious to know how we designed Flutter Apps?

Want to see our products? Check out our case studies  here!

Legal Mates  - a free service for licensed attorneys where they can refer cases within a large network. 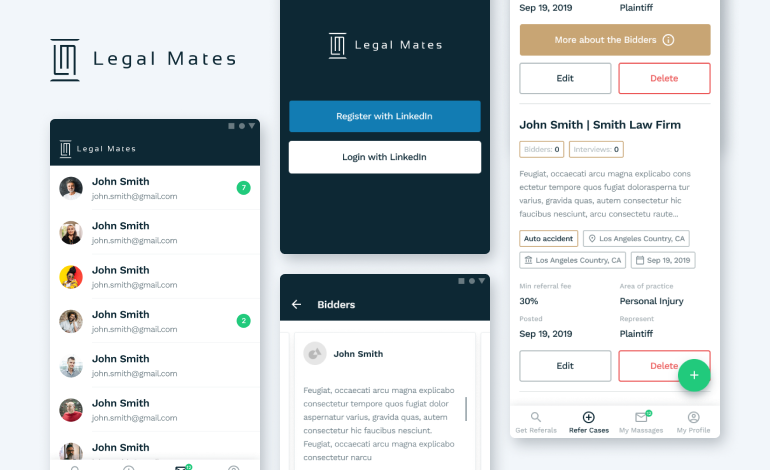 Sync App - the mobile app which connects people to pray, meditate or practice positive thinking at a specific time. 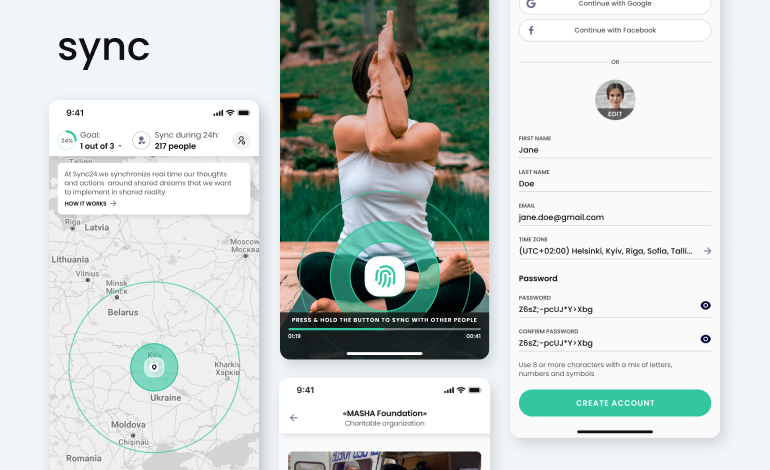 Family Tree - a social network, which connects families. An easy way to communicate with your loved ones. 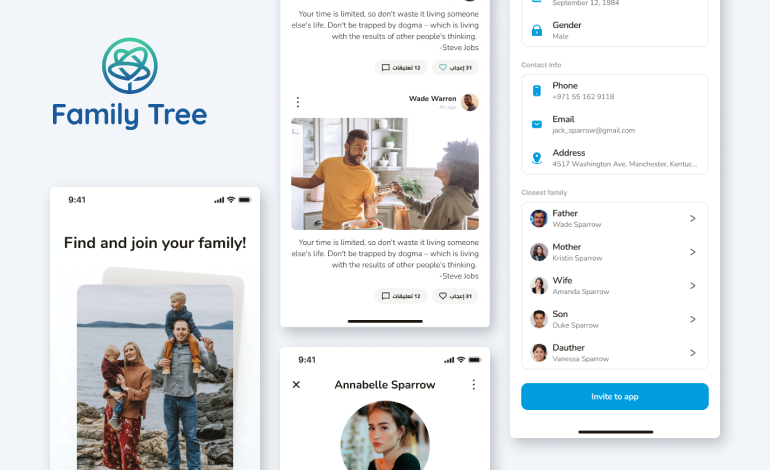 What if your limited budget still doesn’t align with Flutter’s cost-effectiveness, and you would like to reduce your spendings even more? No worries! Here are some tips on how you may achieve just that!

Flutter is an absolute revolution in the app development industry, making it faster, easier, time, and cost-effective! Building apps for multiple platforms via Flutter is mostly a profitable venture. Nevertheless, hiring a development agency with skillful Flutter developers will guarantee your budget isn’t going to waste, and you are getting your money’s worth.