Why Should You Develop a Mobile App on Flutter in 2021? 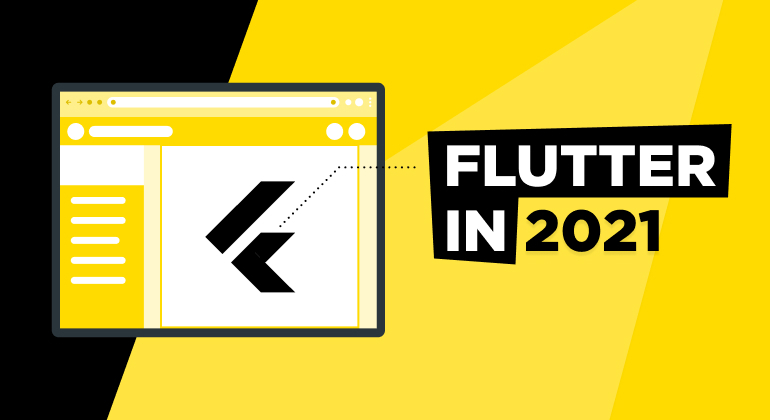 In order to reduce the costs, accelerate release date, and strengthen online presence different businesses develop their applications. One of the fastest ways to develop an app is to use Flutter. It is due to the possibility to create cross-platform applications.

Cross-platform apps are the best decision for any business since native apps for iOS and Android are significantly more expensive to develop and maintain. We have more than 5 years of experience in mobile development, and we insist on the fact that Flutter is one of the best instruments we have worked with.

In plain English, a cross-platform framework is a set of instruments that allows the creation of an application that can be run both on iOS and Android. However, each framework has its own capabilities and limitations. React Native, Xamarin, PhoneGap, Titanium, Ionic, and Flutter are the most popular ones. The perfect framework for cross-platform application development has to satisfy two basic requirements: economy and decent user experience.

Besides the fact that you make one application when two is required is fascinating, but that is not everything you get while working with Flutter. Usually, there are a lot of problems associated with the adaptation of an app to a particular platform, but they do not concern simple applications. However, if you want to create a complicated app, and you will inevitably reach this stage of software development, you will face the problems with which Flutter is particularly good.

In fact, Flutter is not only about mobile development. This framework can also be used in Web and Desktop development. Together with Android, iOS, and web, which are supported by Flutter, it also gives you the possibility to develop for Windows, macOS, and Linux in beta.

One of the most important features of cross-platform applications is the possibility to make them look native so that users perceive it as if it was written specifically for that platform. It is often problematic for a framework to provide the user with smooth animations, particular OS UI elements, and work with gestures, but this problem does not concern Flutter.

Smooth animations are the advantage of Flutter. Apps with Flutter preume the use of familiar and user-friendly native elements without any problems while the apps created with other frameworks may still look like a more advanced mobile version of a website wrapped in an app. Neglecting UX makes your app useless because you will lose your customers, and as a result, this will lower the ratings in the stores and retention.

Flutter is Google's fresh take on cross-platform app development. Despite the obvious economic benefits, even for large-scale tasks, the technology is relatively new, and that is why there are not so many Flutter developers as for now.

However, we chose Flutter framework, or to be more precise Futter SDK, for its convenient toolkit, ease of creating animations, and UI components native-like performance, which is close to native applications. The technology itself seems to be specifically designed to work out micro-interactions that create a sense of comfort and allow the developers to provide thoughtful UX.

Native applications are the ones that are specifically written for a certain OS, such as Swift for Android or Kotlin for iOS. Both of them do not have serious drawbacks, but they require significant development and support costs. You will have to take into account the peculiarities of each platform while creating business logic, layout, and interface. All of these will affect the project budget.

Flutter apps have the advantages of native development as well as allow you to reuse most of the code between different platforms. In this case, you create two or more apps from a single code base. Such an approach may save you up to 40% of the budget.

Besides writing one code instead of two, Flutter provides a possibility to use off-the-shelf features. Moreover, the optimized process of working with animations is one of the best among other frameworks. Furthermore, the function hot reload allows developers to assemble an application from widgets in seconds instead of waiting for it to compile, which is always good for continuous integration. All of these functions seriously economize your time, which can be used for the implementation of the other necessary features of your product.

We also had the experience of work with React Native. After the completion of a few projects, we noticed that React Native has a low entering threshold. In particular, a developer who knows React will be able to code in React Native in two weeks.

However, there are two critical drawbacks in the work of this framework. First of all, the UI code is compiled into native code, which means that a button may look different on different platforms. Therefore, you will have to spend time in order to make the UI look identical on all the platforms you are working with. There was even a moment when we had to increase the development time by 30% due to the IE6 adaptation.

Another drawback is the migrations of the React Native versions. Each update means that you have to fix component bugs, which leads to the package forks. In most cases, when you update the platform core, you need to fix app components and the installed third-party packages.

When choosing a framework you should look at many factors starting from the resources available to the specifics of a particular application. According to Google, there are three main advantages of Flutter:

Why is Flutter development cheaper?

Let us consider an example of developing a catalog project. For example, a catalog of cars with the ability to search, add to favorites, save searches, create a user profile, apply filters, etc. Here is how the development team would look like:

Taking into consideration the number of people you will need for each of the projects, let us apply the time you will need to complete the development. Here is where native and cross-platform development differs the most. 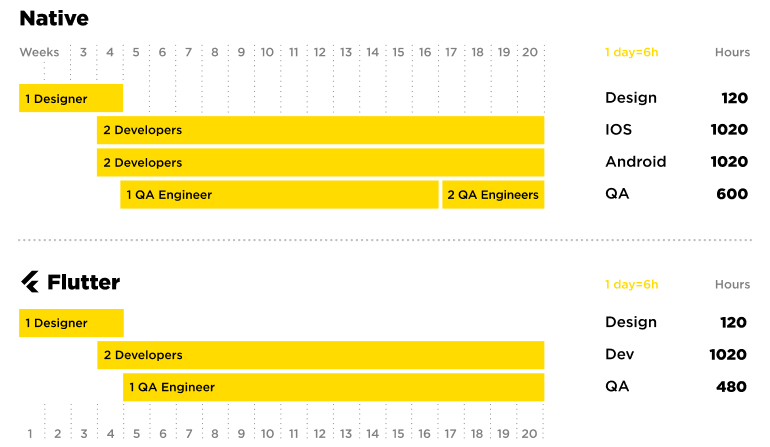 As you can see from the table above, Flutter may help you save a lot of budget. The average percentage of economized finances is 60% on development, 70,5% on QA in case of the use of autotests, and 33,3% on design.

Indeed, there are different projects and the economy may vary depending on them. Moreover, there is a potential calendar design advantage since you do not need to synchronize logic across platforms.

Flutter is a good choice in cases where there is no close integration with the device’s hardware. In 95% of cases, Flutter covers most project needs. If something is missing, Flutter provides an interface to work with the native platform. We tell everything about the advantages and disadvantages of cross-platform solutions before signing the contract. Therefore, be not afraid if you have any questions or if something seems unclear: we will have a talk about that once again.

What about Use Cases?

In short, you can use Flutter for anything. Flutter is used by a lot of companies from Alibaba to SpaceX. However, it is necessary to mention that this framework works best with medium and large businesses. The thing is that a mobile app is not the best decision for a small business due to its significant cost. Instead, such business owners should try using out-of-the-box decisions, which will be much cheaper.

You can use Flutter for:

Here is the shortlist of frequently asked questions. By the way, you can drop us a line  if you have a question that is not listed here.

The apps built with Flutter are quicker and more stable than the apps made with other frameworks. They work with 60 fps, which allows to make animations smoother and launch applications even on older smartphones. The look and UX of Flutter applications make them indistinguishable from native ones for the user.

How Flutter reduces the development time?

The cross-platform framework allows you to reuse most of the code between different platforms, while the business logic, layout, and application interface remain almost unchanged. Because of this, cross-platform apps are more profitable than native apps. Flutter's technical features allow you to develop applications with even greater speed.

Yes. There is no difference between the native development, when the issue of safety is concerned since the native technologies of the platform are used in Flutter. In particular, Touch ID, Face ID, or fingerprint scanner can be used. Furthermore, the application code is encrypted in such a way that it cannot be recovered by reverse engineering.

Why is everyone not using it?

Flutter is becoming more and more popular. According to Stack Overflow data for 2019, 75% of respondents named it their favorite framework. However, native frameworks are still useful instruments, and they still will be used at least for a decade.

Flutter is a promising framework in terms of implementation speed and breadth of coverage. If you are looking for an option to quickly develop an application for iOS and Android with development prospects and without serious losses in quality and budget give Flutter a chance now.

As you could see from the example above, Flutter requires half as many developers if you opt to develop a cross-platform application. Moreover, less code means fewer bugs. In such a situation, there will be less work even for QA Engineers on your project.

Besides, even after release, you will have to update your application, and in the case of Native development, it will cost you a lot of effort again because each of the mobile platforms will have to be updated separately. However, if you choose Flutter, both development and updates will be executed by one team. Therefore, the choice of Flutter will not only accelerate the development but also will facilitate the processes that will follow, which means that you will have more stable releases.

In our opinion, cons of Flutter cannot outweigh its advantages for business and development teams. It is a great chance to build beautiful, high-performance, and outstanding mobile applications that fit your custom needs and requirements. It is worth considering Flutter, especially if you want an app both for iOS and Android just like we did.